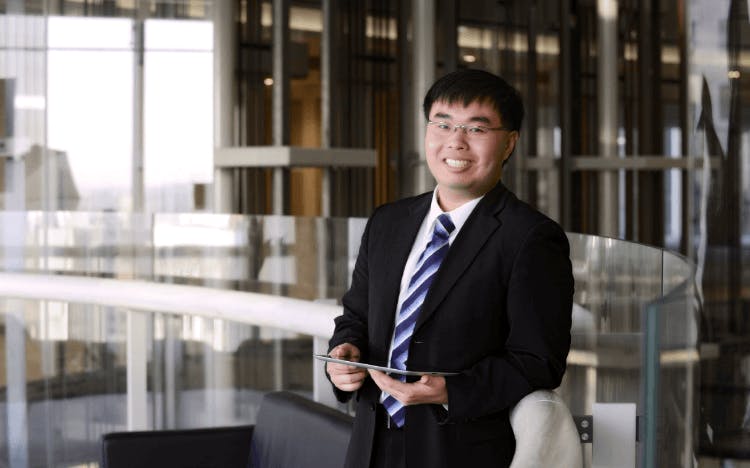 Since setting out on his MBA in China, Charlie Chen has learned first hand how business works in the country. He hopes to land a job with one of China’s growing tech firms.

Although he was born in China, Charlie Chen didn’t grow up in the country. His family moved from Fujian province to Australia when he was just five years old, settling in Sydney.

Over 20 years later, he returned, studying his MBA in China at the Cheung Kong Graduate School of Business (CKGSB).

In Sydney, Charlie studied his bachelor’s in finance and economics at the University of New South Wales. This quickly led to a job with the Commonwealth Bank of Australia, where he progressed to state manager for Asian Business Banking in the state of Victoria.

“A few years into working at the bank, I think the MBA was at the back of my mind,” he recalls. The program presented a way for him to broaden his skill set, as well as access new opportunities—and geographies.

“Attending business school in China was an opportunity to develop my language and cultural skills—and also to go back to my roots, in a sense,” he reflects.

Having completed the 14-month MBA program at CKGSB, Charlie believes that the hands-on experience he gained will help him land a job in China.

Learning on the ground

As the country’s capital, Beijing was the ideal setting for Charlie to learn about business in China.

“Beijing was ideal as I could completely immerse myself in the local culture and way of doing business. If it were a city such as Shanghai, where there’s a larger international presence, I may not have been as motivated to integrate with the local community,” he explains.

This location, along with CKGSB’s prestigious reputation, made the decision to study there easy, Charlie says.

“It wasn’t only the economic growth in Asia, but also the technological advances that attracted me,” he observes. As a banking professional, fintech sits high on Charlie’s lists of interests—and China is certainly pulling ahead in this area. Having more mobile payment users than the US has inhabitants, the uptake of fintech is arguably faster than anywhere else in the world.

During his time at CKGSB, Charlie was able to see first hand how companies are adapting to this kind of technology. Each year, MBA students can undertake the China module, which brings students from CKGSB, ESSEC, IESE, and Michigan Ross together in Beijing for two weeks.

Charlie had the chance to visit tech companies from Microsoft to Lenovo, to hear about their Chinese operations. “We also visited local companies such as coworking space provider UCommune, and the short form video platform, Kuaishou,” Charlie adds.

Later in the MBA program, he and his cohort also travelled to Shanghai and Shenzhen, to learn how business operates in different regions of China.

“Shenzhen is known for manufacturing and hardware,” Charlie notes. “A CKGSB professor there sits on the board of DJI, one of the largest drone companies in the world.”

In Shanghai, on the other hand, Charlie discovered a finance hub. Here, he and his fellow students visited the local stock exchange, and local fintechs including consumer finance company, Vision Credit.

“It was really helpful to hear from the founders and the key leadership team of these companies about how they got to where they are today, and how they compete in the China market,” Charlie explains.

Finding his own competitive edge in the Chinese job market was a learning curve, Charlie notes. The country’s work culture is quite different to Australia’s, which he discovered during an internship with local tech giant, Baidu.

After connecting with a CKGSB alumnus at the company, Charlie landed a role as MBA intern with the international strategy team. In this capacity, he helped his team research new revenue streams for implementation beyond China.

“I had a great team of colleagues, who helped me practice presentations in Chinese, and welcomed me to the working culture,” he recalls. One important concept for Charlie to grasp was guanxi; the practice of building strong business relationships.

“In China, building this trust is key,” he notes. “Without guanxi, doing business in China would be extremely challenging.”

By adding this cultural understanding to his repertoire, Charlie hopes he can bring value to growing companies in China, especially those that are serious about expanding to international markets.

Drawing on what he has learned both in and out of the classroom, he has decided to target growing tech firms in China, with a focus on financial services that will allow him to leverage his banking experience.

“As I progressed through the program, it shaped where I wanted to go,” he explains. For other professionals with an interest in China, he recommends the MBA program highly.

“You can never match being on the ground, observing and speaking to people, for learning,” he says.

“China and Asia are set to play a bigger role in the future, and having a strong network in China will be a great start.”

10 Reasons Cheung Kong Graduate School of Business (CKGSB) is the Elite Business School in China
Why This Student Chose to Study an MBA at CKGSB in China over a European School
CKGSB – Cultivating Future Business Leaders with a Strong Sense of Social Responsibility
Why Cici Liu Quit Her Wall Street Job and Went Home to China for her MBA
Amorepacific’s eldest daughter Chose an MBA in China
As an international student, can I land a job in China?
Sankar Nohan: Taking The Leap and How an MBA at CKGSB Bagged Him a Job at Amazon