Do you want to advance your business competency and understand the latest trends in the global market?

Are you planning to transition into a new career or gain access to a strong network?

CEIBS – The Business School of Choice for Professionals

CEIBS is one of the most respected international business schools in China and the world. It is the only business school that links the East and the West in teaching, research, and business practice.

CEIBS is a strong ally of the Chinese government in the promotion of China’s social and economic development through high-impact knowledge creation and dissemination.

With locations in five cities across three continents, CEIBS is the B school of choice, for every stage of your career.

Why Study at CEIBS?

1) CEIBS is the only business school in Asia to have simultaneously made it to the Financial Times’ top 5 list of MBA and EMBA programs.

The CEIBS MBA Programme has ranked in the top 25 of the Financial Times’ annual global business school ranking for 15 consecutive years (2005-2019). The Global EMBA Programme is number 5 worldwide and is the highest-ranked stand-alone program in Asia in 2019.

CEIBS MBA Moves Up to #5 in FT Rankings

2) CEIBS’ faculty is among the best in Asia.

Professors at CEIBS are uniquely equipped to deliver a combination of China Depth and Global Breadth in both teaching and research.

CEIBS has nearly 70 full-time faculty members, experts in five disciplines, represent more than 10 countries and regions worldwide. They bring a wealth of experience from teaching overseas, research and business practice.

Each year, the school also invites nearly 100 visiting faculty members from all over the world to share and exchange the most up-to-date knowledge from both in and outside China. 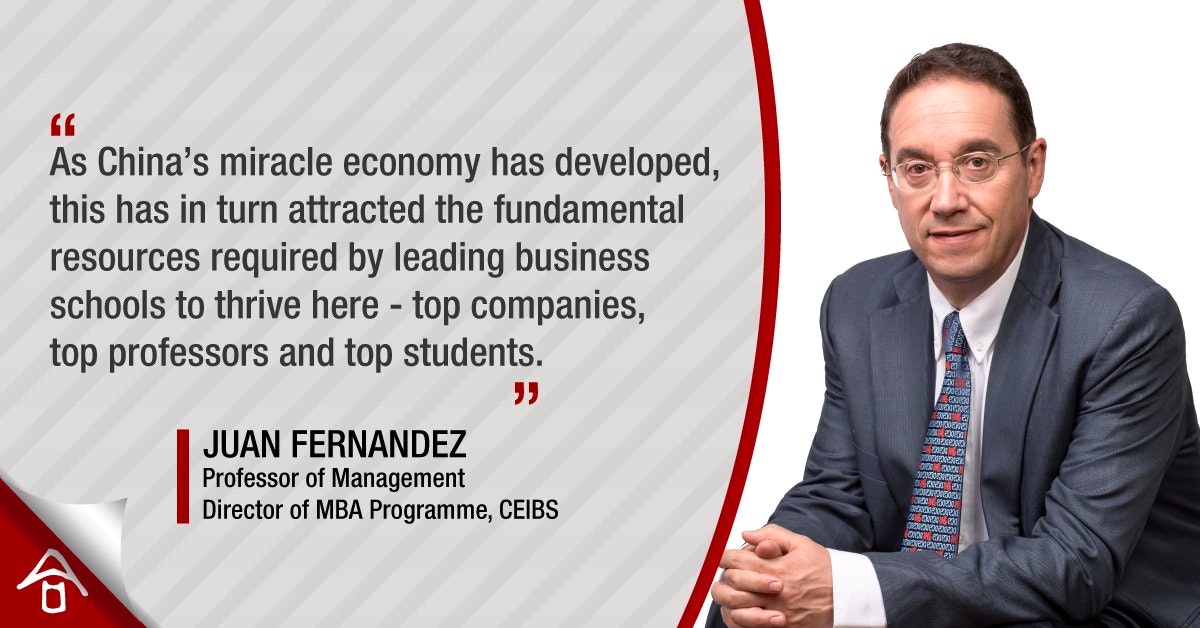 3) CEIBS has numerous campuses across China and the world.

The business school has campuses in Shanghai, Beijing, Shenzhen, Accra in Ghana, and Zurich in Switzerland. CEIBS became the first business school in mainland China with its own campus when it established a facility in Shanghai’s Pudong district in 1994.

In 2013, the school opened Phase III of this main campus in Shanghai. The expansion doubled the size of the campus to a total floor area of approximately 84,000 square meters.

The Zurich Institute of Business Education (ZIBE) is CEIBS’ European base, located in Horgen right on the shore of Lake Zurich. The campus helps create the perfect mix of innovation and tradition.

4) CEIBS takes pride in its world-class facilities which are impressive, comfortable, and technologically advanced.

Building designs maximise the shape and specific characteristics of the land available. The end result is an optimised open space with a heavy emphasis on transparency, reflection and light. A glass pyramid surrounds the CEIBS signature black-granite-floor indoor lake which is the focal point of CEIBS Shanghai Campus Phase III.

Wi-Fi is available in virtually all the rooms from the cafeteria to the 720-seat conference hall, providing students with an easily accessible high-speed connection to the school’s information network and databases.

5) CEIBS is one of the most cited researchers from Chinese Institutions.

CEIBS devotes time to the in-depth analysis of China’s business practices. Among the 2018 list of Most Cited Researchers from Chinese Institutions, 9 of the academics in the business, management and accounting category were from CEIBS.

This is the fifth consecutive year that CEIBS has featured prominently in this category, an indicator of the school’s research capabilities in these fields.

As China’s only business school to originate from government-level collaboration, CEIBS commits to educating responsible leaders versed in “China Depth, Global Breadth” in line with its motto of “Conscientiousness, Innovation and Excellence”.

Leaders from the Chinese central government and the EU have respectively lauded CEIBS as “a cradle of excellent executives” and “a role model of EU-China cooperation”.

Renowned for its academic rigor, CEIBS is the first business school on the Chinese mainland to have been accredited by both EQUIS and AACSB. To date, CEIBS has more than 22,000 alumni from over 80 countries worldwide, and has provided a broad range of management programs for more than 160,000 executives both at home and abroad.

Do you want to live and experience China and the CEIBS MBA to the fullest?

The CEIBS Summer Pre-MBA Boot Camp can help you make the right decision. Running on its ninth year, the Pre-MBA Boot Camp is a week-long program designed for professionals who are planning to enroll in an MBA at CEIBS in the next one or two years.

During the boot camp, you will meet successful professionals belonging to a wide range of industries and are graduates of the full-time MBA program. You will also get to learn about CEIBS’ strong and elite alumni network, tour around the CEIBS campus and meet friendly student ambassadors who are willing to share their experiences

Get in touch with China Admissions to fast-track your application.