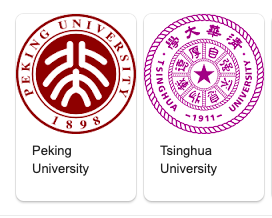 I don’t think any one person can really answer this question objectively but I can try to give some advice from the perspective of which one to choose as a foreign student.

I have studied Chinese at Peking University, an China Admissions helps foreign students to apply to Peking and Tsinghua University each year.

Which program are you asking about?

The most popular programs for applying to Peking and Tsinghua are the Chinese language programs. Tsinghua has a larger program of around 400 students and Peking has around 100. Both of these are filled every year.

While both are now comprehensive Universities, they have a different culture which comes from their backgrounds when Peking was more focussed on liberal arts and Tsinghua on engineering. They are often compared to Harvard and MIT.

When seeking to choose which one to study at, I would advise you to have a think clearly about what are your targets in the future, and what you are seeking out of the program. You can then call the University to ask some questions and also speak to students who have studied on the program before for their advice. I believe it is worth putting in this small amount of effort if you are considering investing 1 year or more into the program.