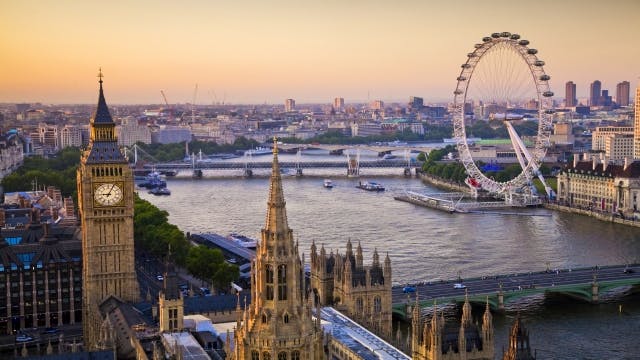 The goal of the visit was to encourage students to explore China and introduce the Chinese construction industry as well as open opportunities for British students in project management. The ICPM program at Tsinghua University was also introduced during the visit.

Interested to start a career in construction, project management or technology?

They visited the University of Exeter which is Richard’s alma matar. It is located in beautiful South West England, Devon. Richard studied Politics, Philosophy and Economics at University of Exeter before starting studying a semester exchange in Beijing. They spoke together with Exeter Entrepreneurs which is one of the largest student societies on campus. University of Exeter is a top 10 ranked UK university and has an excellent reputation with a gold rating in the Teaching Excellence Framework.

They also had the chance to go to Birmingham City University (BCU). The university’s campus is stunning, but the best part of the visit is the friendly environment. BCU has a diverse community which makes it a very popular place to study. Birmingham is the second largest city in the UK and will be the home of a new planned HS2 railway link between Birmingham and London.

London South Bank (LSBU) was the next stop for China Admissions and Tsinghua University. LSBU is a vibrant, multinational university and one of London’s top modern universities. State-of-the-art buildings and facilities are noticeable inside LSBU’s campus.

They also visited Oxford Brookes University is an unforgettable university with its warm and welcoming atmosphere. The university is known for its Real Estate Management, Journalism and Publishing and MBA programs.

They also visited King’s College London on the final day and spoke on a panel with Kings Real Estate Property Society and Dr. Xin Sun who is Lecturer in Chinese and East Asian Business at King’s Lau China Institute. They discussed the future of the property market. They explored the rapid growth in house prices in China, comparing this to other markets and the potential future.

It was great to meet so many British students and thank you to all the students, universities and student groups who attended the series of talks.

China Admissions hopes to be back very soon!

The number of UK students seeking degrees or work in China has been soaring for the past year. According to the latest figures, China could overtake the US as the top destination for international students in the next 5-10 years.

Need assistance to start your university applications in China? Connect with China Admissions and we will guide you through the process.