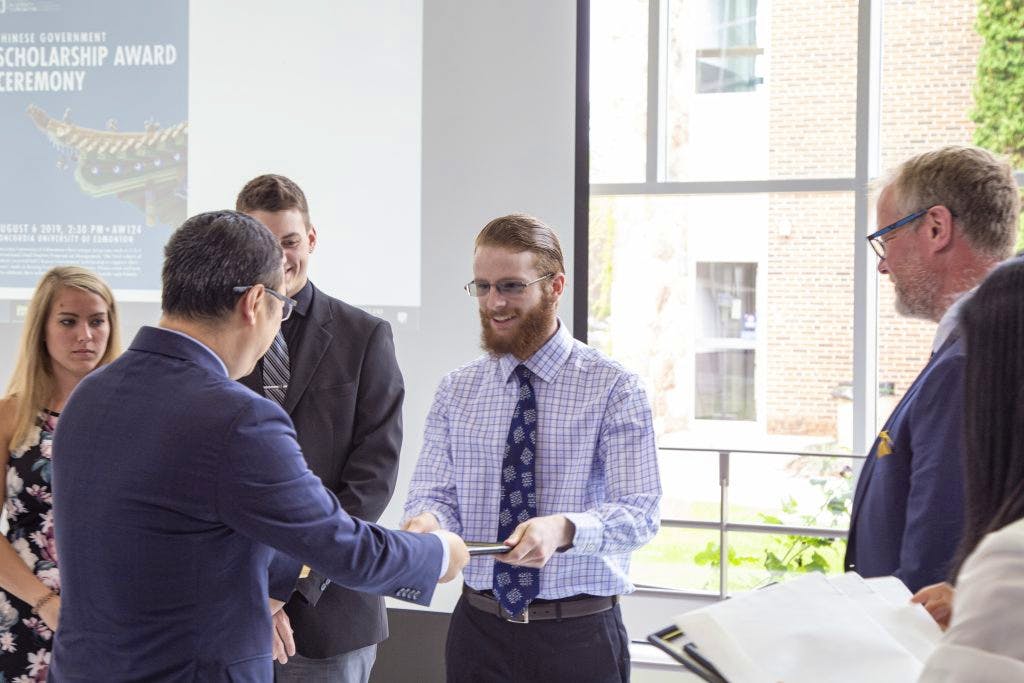 Benjamin John Lummis is one of the three Concordia University of Edmonton (CUE) students awarded with a Chinese Government Scholarship for the unique dual degrees Bachelor of Management program.

Benjamin moved to Beijing and started his 2nd year in the 1+2+1 Dual Degrees Program on Management since late August 2019. He has settled in nicely in the International Business School (IBS) at Beijing Foreign Studies University (BFSU).

Outside the classroom, Benjamin is pursuing his passion on ice. On weekends, he is a hockey referee for the Beijing Hockey Association. Beijing is going to host the 2022 Winter Olympics, so hockey is a fast-developing sport in China.

I’m Benjamin John Lummis. I’m from Canada, but here at BFSU doing a dual-degree between my university back home and BFSU.

Why did you choose to come to China?

I have a stepfamily in China. I want to get to know them better and gain a better understanding of Chinese culture and language.

Why did you choose BFSU-IBS?

It was part of the program given to me when I came to China. I didn’t have a choice between any of the universities.

What do you think of China?

It’s great. Everyone here is very nice, the food is amazing, and the weather is much better than where I’m from.

What do you think of the food in China?

The food is very different. In Canada, a lot of the food is very similar to American food. It’s very fattening. Most are fast food, like burgers and hotdogs.

After a while, that can get pretty stale whereas here there’s more of a variety. Every restaurant I’ve been in has something different compared to what I’m used to so it’s pretty cool.

What was your favourite Chinese food?

I have a lot. I like Peking duck, Jiaozi and Baozi. I also like hotpot. I can’t really pick a favourite its all really good.

What do you think of life in Beijing?

It’s different from Canada. First of all, I don’t speak very much Chinese yet so I have to tackle communicating with like taxi drivers and food servers, without actually speaking the language.

On top of that, it seems like everyone here is always doing something if that makes sense. Where I’m from there is so much space and such a small population. You can walk outside your door and there won’t be very many people walking around. Whereas here, I step outside my dorm and there’s someone in every corner doing something.

Have you traveled to other parts of China?

I’ve traveled to Pingyao as part of an immersion week. I visited China once before when I was 12, for a week and I’ve been to Hong Kong, Guangzhou, and Beijing.

What do you think of the classes at BFSU-IBS?

The classes at BFSU are smaller than I was expecting. Comparing it to the university I’m from in Canada, it’s actually very similar in terms of teaching methods and the class size.

How students participate in class is also the same. It’s nice because I don’t really have to adapt much in terms of how I learn in class.

What did you learn most since coming to China?

I would say it’s learning Chinese. It’s definitely the most difficult thing compared to my other classes. Most of my time I’ve been writing characters down and speaking Chinese with other people around me just to get as much practice in as I can.

Is it hard to learn Chinese?

I would say it’s hard to learn Chinese if you try and learn it with an English speaking perspective. There are things between Chinese and English that are mistranslated. To learn Chinese, you have to act as if you have no knowledge of previous languages.

What do you plan to do in the future?

I plan to finish my degree first of all. After that, I really haven’t put much thought into what I want to do after university.

Coming to China, I have learned that I like learning things. I feel like I’m the type of person where if I get put into any school setting I’ll enjoy it. I was thinking of continuing my education after my degree or implement what I know into the business environment, either in China or in Canada.

What would you say to students who are considering coming to China or BFSU?

It’s really fun. There hasn’t been a night where I’ve laid in bed thinking, “man I should be back home”. I’ve been enjoying my life here so just come here and enjoy every bit of the experience.

How would you describe China in one word?

I would say humble. Humble would be the best way to describe China.

Is there anything else that you’d like to say to other students?

If you’re thinking of China, don’t hesitate, it’s a great experience. I’ve learned so many things in the past few months that I would never have learned in Canada. If you have the opportunity, take it.

Thank you, Benjamin, for that interesting interview. We wish you the best of luck in your dual-degree management program and have fun with hockey in China!

BFSU is a leading University in Beijing, traditionally specialising in the training of Chinese ambassadors and diplomats. It is a university well-respected for its reputation in academic excellence and quality education. Learn more about BFSU here.

You can also read about the experience of James Wakelin at BFSU-IBS. James is Benjamin’s fellow Chinese Scholarship Awardee at CUE.

Planning to apply at BFSU but don’t know how to start? Get in touch with China Admissions.