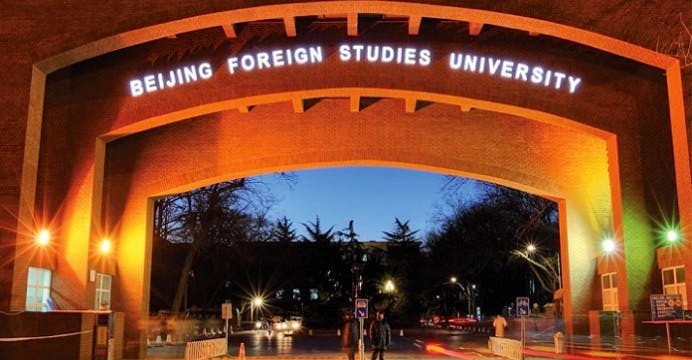 Beijing Foreign Studies University (BFSU) or Beiwai in Mandarin, is a renowned university in Beijing, China. The university is under the direct supervision of the Chinese Ministry of Education.

BFSU has one of the oldest language programs in all of China. It’s a topnotch university having been included in the list of China’s best schools. In BFSU, you can choose from a wide variety of foreign language majors on different educational levels.

BFSU has a long history dating back in 1941. It started as part of the Russian Language Team in the Third Branch of Chinese People’s Anti-Japanese Military and Political College. Its name was later changed to Yan’an Foreign Languages School and was under the leadership of the Central Committee of the Communist Party of China.

In 1954, after the People’s Republic of China was founded, it was renamed as the Beijing Foreign Languages Institute. The university has been under the care of the Ministry of Education since the 1980s. It was in 1994 that it took its current name.

Today, BFSU is one of the most credible universities in China, offering 98 foreign language programs and a wide range of education courses. You can also study doctoral programs in foreign languages, literature, journalism, political science and more.

In its more than 70 years of existence, BFSU has produced 90,000 graduates who have exemplary language competencies. The university is dubbed as the “Cradle of Diplomats”, as 400 ambassadors and over 1000 counselors who serve in the Ministry of Education graduated in BFSU.

Behind BFSU’s quality language programs are more than 600 qualified and competent faculty. Every year, the university invites 120 international teachers from over 20 countries to provide their expertise in different courses and programs.

BFSU is situated in the Haidian District of Beijing. The university has two campuses: the west campus and east campus. You can check out the map below for directions.

BFSU is in the 19th place out of 2879 Chinese universities. This is based on the test scores of takers for the National College Entrance Examination from 2012 to 2018.

The university has over 320 academic partnerships in 65 countries around the world. As a leading lecturer of Chinese language and literature, BFSU has helped develop 15 Confucius Institutes internationally.

Every year, BFSU accepts less than 2000 students from millions of applicants. For this reason, the university produces graduates who become businessmen, lawyers, doctors, and diplomats. In fact, research shows that BFSU graduates are among the top-earning professionals in China.

If you’re keen on taking a business degree, BFSU has an International Business School (IBS) that offers a strong academic curriculum. IBS is a fairly new program of BFSU, but its robust and quality methods ensure competent business graduates.

IBS offers both English-based programs and Chinese-based business-related courses for students. At the end of the program, you will gain the latest business theories and practice to help you succeed in the industry or become driven entrepreneurs.

BFSU has business experts as professors. They offer broad perspectives about business both in the local and international scene. In the whole duration of your stay at IBS, you will be given the opportunity to visit Fortune 500 companies. You can also look forward to your internship, as well as employment opportunities, as most BFSU graduates enter multinational companies and institutions in China.

Experience a diverse and cross-cultural student community, avail of scholarships and immerse yourself in Chinese culture by living with local Chinese families only at BFSU’s business school!

If you’re an international student, you can choose from a wide array of BFSU’s programs depending on your field of interest.

China has one of the most robust economies in the world, and it is influencing the international scene. Its entrepreneurial culture and business industry just get stronger and stronger every year, making China a force to be reckoned with in the global market.

What better place to learn business than in China? Get a bachelor’s degree in business, finance, marketing, and China studies only at BFSU! They offer one of the best business curriculums in China. BFSU also provides you with the best on-the-job-training from world-famous companies. The university gives you topnotch information to hone the entrepreneur or business professional in you!

Chinese is the most spoken language in the world. You can obtain a 4-year bachelor’s degree in Chinese Language and Literature at BFSU. To date, more than 2000 international students have graduated from this program.

Taking up a Chinese program will help you improve language competency and immerse yourself in Chinese writing, reading and culture. Work in the local scene, be an interpreter/translator or become an integral part of the business world with a Chinese proficiency!

Want to become a key player in the dynamic global marketplace? Learn the newest trends, practices, and theories in business and turn this information to revenue by obtaining a Master’s in International Business at BFSU!

In this program, you will learn how global economies, business systems, and multinational corporations work. You will also gain a better understanding of the supply chain, global strategic management, and international business law.