Introduction to the Program

The MBBS at Zhejiang University is a 6 year program for international students taught in English.

Zhejiang University is located in the eastern coastal city of Hangzhou, the capital of Zhejiang province, which lies 180km south of China’s largest commercial center Shanghai. As one of the seven ancient capital cities of China, Hangzhou has a history of over 2,200 years. The city is also a world-famous tourist resort praised as ‘a paradise on earth’, boasting very favorable natural conditions, with a mild climate, convenient transportation systems, picturesque scenery and rich cultural heritage. In the 13th century, the Italian traveler Macro Polo admired Hangzhou as ‘the most beautiful and splendid city in the world’.

Founded in 1897 as one of the earliest institutions of higher learning in China, Zhejiang University is now a leading research university under the direct administration of China’s Ministry of Education. Reputed as the ‘East Cambridge’ in history, Zhejiang University has always been ranked among the top universities in China in terms of its academic strength shown in teaching, research, and social service. For more info visit the page here.

ZUSM has established international links with scores of medical institutions in Asia, Europe, Australia and North America. Programs like collaborative research projects and exchanges of faculty and students have been launched. For more information about School of Medicine, please visit this link.

Start Date of the Program

M.B.B.S. candidates must have passed the examination with a minimum percentage of marks over 70% aggregate in physics, chemistry, and biology (Zoology &Botany), and provide a high school diploma, transcript. And the candidates must be of the age between 17 years and 30 years on 31st December of the year of admission. 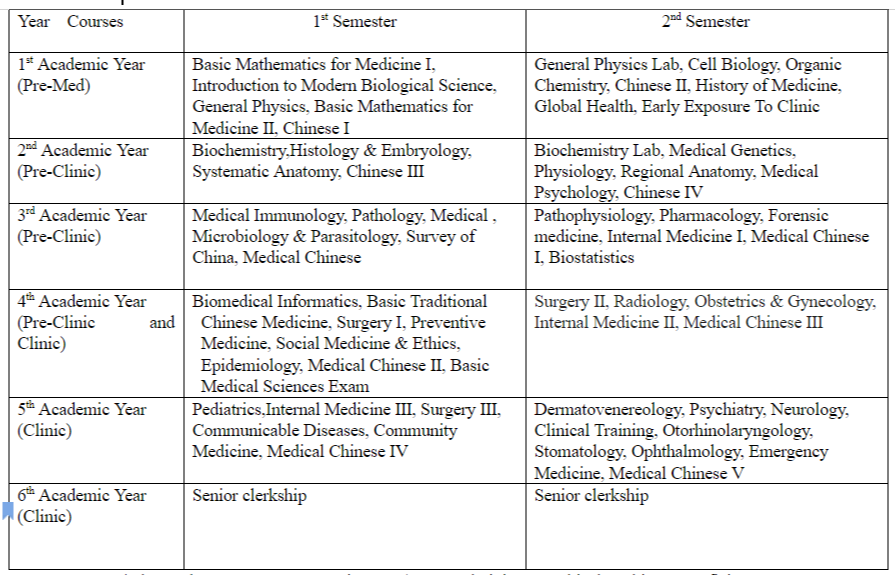 *The students must score 190 in HSK(Hanyu Shuiping Kaoshi, the Chinese Proficiency Test) Level Ⅳ or above and pass HSKK(HSK Speaking Test) Intermediate Level before taking the senior clerkship in China.

*More than top 20% students can get outstanding academic performance scholarship every year.

* The fee for accommodation excludes electricity and water bill.

Students are expected to live in the International Students Dormitory, where twin rooms or four-bed rooms are available. Almost every room is equipped with telephone, internet access, private bathroom with shower and air-conditioners. Public kitchens and washing machines are also accessible to students in the dormitory.

The University has on all its campuses several convenient and inexpensive restaurants where a good variety of Chinese and Western foods are served. There is also a small restaurant to serve Muslim food.

For more information about admission application, please visit this link.