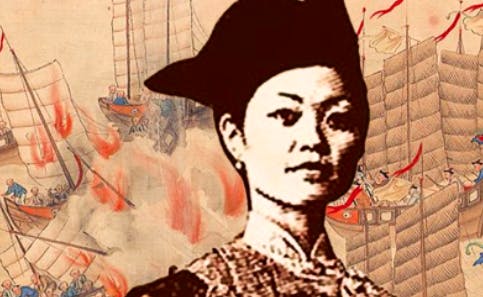 “Women hold up half the sky”
Mao Ze Dong

It is true that China is becoming more and more equal, and China is also very safe.

Here is a story of a very interesting famous Chinese female pirate.

Originally a prostitute on a floating brothel, she married Cheng I who was a notorious pirate. On his early death at 39, she made moves to consolidate her power.

In order to unite the pirates she issued a strict code of laws which included beheading for not following orders, sharing the bounty equally. Failing to follow resulted in putting pirates to death, clapping in irons, or quartering. Ears were chopped off for deserters.

Here are some interesting characters:

We know that tian means field, but if you see it connected to a body it is bad news and has an evil meaning.

鬼
Gui is a ghost, it shows a man with a strange head and a tail.

The devil is mogui which is just the 麻 and 鬼 to give it the sound of mo.

Means all types of devils and monstors, and it is made of mountain elf, goblins and demons!

Are you interested in learning Chinese? Checkout some of the programs in China and online here.