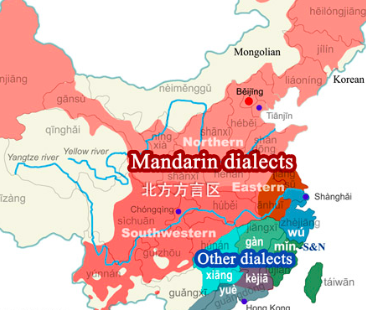 There are many different dialects of the Chinese language. They differ in so many ways—vocabulary, pronunciation, grammar.

Because of the huge size of China, when the China Communist Party liberated China in 1949 one of the major problems they faced was that China was divided into hundreds of mutually-incomprehensible dialects. This meant that communication between different people of different areas was very difficult. This posed a great problem to the coordination and running of the country. In order for China to develop and be able to compete with the developed world, it was absolutely vital to bridge the gap between the different dialects and create a lingua franca. In 1955, they standardized the language and declared ‘Putonghua’ otherwise known as Mandarin or ‘Common language’ as the official language of the Peoples Republic of China which was based on the Beijing dialect.

In order to make this language the official language it became taught in schools in every part of China. What this means is that all of the people in these regions, where Mandarin was not previously spoken, had to learn this new language. The result is that many Chinese people are actually bilingual already, so they speak their own local dialect at home, and the standard Mandarin language in the classroom and formal settings such as work. As people get older, they may begin to forget Mandarin since they only speak in their native language.

Some western linguists even believe that several dialects could not be counted as “dialects” at all, since they are so different from Mandarin, they should actually be called different languages. It is true that some of the major dialects are mutually incomprehensible, but still they are all linked by one thing: the Chinese characters. Besides, their differences in vocabulary or grammar are not something fundamental. Their key difference lies in pronunciation, or we can say accent. There are three main dialects.

The Northern dialect is the main Chinese language and is referred to as Mandarin. The majority of Chinese people speak this, about 70% of the Chinese population speak “northern dialect” (北方方言). It is called “northern dialect”, but actually it is the most extensively distributed dialect; many people in south China also speak this dialect. It bears the greatest resemblance to Mandarin. Its most typical example is Beijing accent. Actually Mandarin Chinese is an improved version of Beijing accent, which is also called “the language of officials” (官话). Beijing has been the capital city of China for hundreds of years, so Beijing accent was the mother tongue of almost all high-ranking officials in feudal China. All the inferior officials who lived and worked away from Beijing must learn speaking Beijing accent, so that they can communicate with their bosses when necessary. Northern dialect has four major sub-dialects:

the accent spoken in northwest China, such as Shaanxi Province, Gansu Province, etc;

the accent spoken in the area near the Yangtze River and Huai River, including part of Anhui and Jiangsu Province, etc.

These four sub-dialects have differences from each other, but their similarities overshadow the differences, and that’s why they are grouped together. To put it simply, someone in Liaoning can perfectly understand an old man in Beijing. He might find it a little harder to communicate with someone from Chengdu, but problems would be solved if the Chengdu guy can just slow down a little bit. Most people in these regions can understand each other, although people in big cities, and younger people (who have just been educated) will speak a more standard accent than older people, in more rural areas.

About 8% of the Chinese people speak Wu dialect (吴方言). It’s not a large number compared with the population speaking northern dialect, but it’s the second most influential dialect in China, because this dialect is mainly used in southern part of Jiangsu Province, most of Zhejiang Province, and Shanghai —an area full of economically fast growing stars. Wu dialect sounds very different from Mandarin Chinese. Basically it’s no way that someone from northern China can understand Wu dialect. Apart from its tones, Wu dialect has very strange collocations. For example, people in Shanghai excessively “manipulate” the word 吃 (meaning “to eat”). They use the phrase吃红灯 (红灯indicates traffic lights) to express the meaning of “stopped by traffic lights”. How could the fact of “being stopped” in any way be related to “eating”? But don’t worry. I can assure you that you will find no trouble communicating with people in Shanghai if you speak Mandarin, because 80% of the Shanghai people can speak Mandarin just as fluent as speaking their native dialect. What’s more, as a cosmopolitan city, Shanghai attracts a large number of well-educated people who speaks very good English, and there are hundreds of thousands college students fluent in both Mandarin and English.

About 5% of the Chinese people speak Cantonese. Its typical example is Guangzhou accent. Apart from citizens in Guangdong Province and Guangxi Province, people from Hong Kong, Taiwan, and Macao also speak Cantonese. It has a very complicated tonal system: about 9 tones in total. It is also a dialect that preserves the most original features of ancient Chinese language, but written Cantonese does not equal traditional characters. Actually only people in Hong Kong, Taiwan, and Macao are used to write traditional characters; mainland citizens who speak Cantonese usually write simplified Chinese.