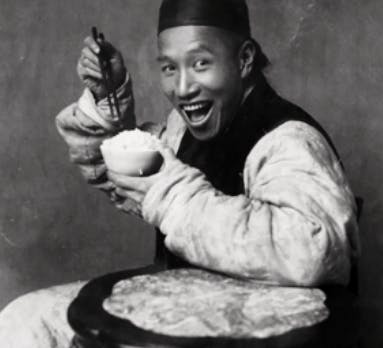 Recently the internet thought it was a fake photo but its actually real. It was taken in 1901-1904 by British explorers of a villager eating rice. Why did they think it was fake? Because his pose looks so modern.

Did you notice that in old photos people are never smiling? Because it took so long to take the photos. Smiling in photos only became popular in 1920s.

Before that, people considered taking their photo similar to taking their portrait. They just stood there. This guy didn’t know that tradition and seems way ahead of his time.

Food is a really big part of Chinese culture

This character  is made of three fish 鱼 the image of a fish is one that looks like a fish, but has been simplified over time so it might not look that much like a fish now.

From oracle script, to brone, to now,  its evolution can be seen below.

If you put three fish together, its seen as more attractive to people in a restaurant who really want fish.

羴shā
You can also see the same concept with three goats together.

And with three cows, which also has the meaning to rush about.

This the character for a type of noodles in Shaanxi province for biangbiang noodles. 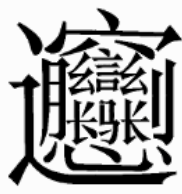 The character is made of the Chinese character “to speak” (xin) 言 in the middle with “tiny” 幺 on both sides. Below it “horse” 马, with “long” (chang) 长 on both sides with. Surrounded by “moon” 月 to the left, “heart” 心 below, and “knife”刂 on the right. Then there is “cave” 穴 on the top and “to walk” 辶 on the bottom.

You can try to guess at what it means.

There is some debate about where this character comes from in Chinese. One source is that a student invented the character to get out of paying a bill in a restaurant. Others is that it is based on a sound that is made. Most likely is that a noodle restaurant which may have been a clever marketing tactic to attract attention. 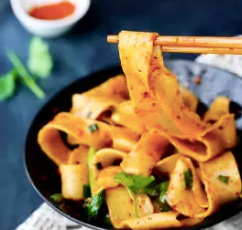 Are you interested in learning Chinese? Checkout some of the Chinese programs in China and online