My name is Kenza.  I’m from Morocco. I did my Master’s here in Entrepreneurship and Innovation Management in 2015 at University of Nottingham Ningbo China.

How was the program?

Why did you want to study entrepreneurship?

How is the entrepreneurial spirit in Asia or in China?

The very simple example is that in the classroom there are 35 students, around 10 of them had already started their businesses before so that tells a lot about how youth in China are more prone to start their business, they’re more if I can say risk takers in business, they’re more enthusiastic and entrepreneurial and they’re there to start their businesses even at a young age, even as students.  I think that was a considerable difference compared to other universities I’ve been to in Morocco, in the US, in Germany.

How did you get the idea to study in China?

You hear about China everywhere.  All industries are booming here. So, to go on with that boom, to take the wave of the expansion of Asia, it was pretty obvious that I had to come here to see myself how China is becoming one of the greatest economic powers in the world.

When did you graduate and what have you been doing since then?

I graduated two years ago from Nottingham University and I’ve worked in various projects.  Two of them were in export/import. I joined two entrepreneurial projects. One of them is running currently.  For now I’m working as a professor teaching finance and accounting in a local university in Ningbo.

What do you think it’s like for a foreigner to start a company in China?

I’ll say that the problem with foreigners starting a business in China is that there is too many opportunities, there are too many things to be done so one has to be focused.  So, I think for foreigners who are ambitious, who want to do something in China you’ll always find a way to do it, you’ll always find people who will help you and the resources are not lacking—whether it’s financial resources or just contacts. Getting started in export, getting started in the service industry, all of these are very promising. And once you decide to start, you always find resources and people to help you do it.

It was promising when I first came two years ago and it’s getting even more promising now. How can University of Nottingham Ningbo China help you to start a business?

Well, first of all there’s an amazing incubator here that they’re building next door.  There’s a huge incubator, it’s very trendy. You just walk in there and you meet people, you meet people doing experiments, you see some of the machines, some very advanced drones and robots.  The least you can do is talk to these people, talk to these entrepreneurs and see what they’re up to and you never know what can happen in places like that, in places like Nottingham where you meet very creative people, people who are working on either specific projects or they’re still trying to find their way.  It provides a place where people meet and that’s where anything can happen. 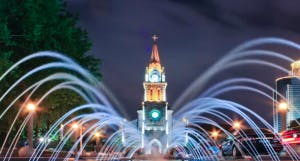 I think that definitely to live in China the language barrier is still there, everything is still running in Chinese.  But that is the biggest advantage of UNNC because it is the only place where you know for sure that everywhere you go there are people who speak English, people that understand you and the language barriers are not valid in Nottingham.  Whereas, yes, I would I agree that in China, the language problems are still… I wouldn’t say a challenge.

Do you think if you don’t speak Chinese it’s okay to come here?

If you don’t speak Chinese that’s an extra reason to come here—to learn Chinese.  I think that all throughout China you still need Chinese to get around. But China is getting more international.  English signs are everywhere. And the actual language barriers are not valid in Nottingham specifically because everything is in English.  It’s the only place where you can be sure that everybody speaks English and that everything you need can be done only using English. That at least for me was  first great step to China—to step into a place that is very international, much more international than other campuses in China, step into this place that allows you to learn to do everything that you need in English while still being in China and learning Chinese.  So, after my degree here I was ready to go out to the actual Chinese speaking China.

How is your Chinese now?

It is alright.  I can have conversations, maybe not talk about politics or economics in Chinese but i can have very friendly conversations, enough to make friends with the taxi drivers and neighbors and all of that.

What do your parents think about you studying in China?

My parents were actually very impressed that China would be so transformative and that it would affect me that much.  At first I was planning to come here to do my Master’s and then go back to my home country, then I ended up staying—now it’s my third year in China.

When my parents visited me they were so surprised at how much growth has happened in one year here.  They were very supportive and they wanted me to stay and to continue whatever I was going into. For them it was a very pleasant surprise I’d say. Can you tell me about the business that you’re doing now?

Currently I’m helping students to apply to universities in China and to get started with their Chinese dream here.  It all started with that. People are interested in China and for good reasons. So, just by sharing my experience I ended up motivating so many people to also try their chance in China and seek opportunities to study here.  My business now is helping students discover the opportunities to study their Bachelor’s, Master’s, PhD, or language, get scholarships, get internships in China. That’s basically it. My job is to motivate people and just to tell them what can be done here, what they can find in China.

Do you think many foreigners understand what it’s like here?

I think most people do not realize the things that happen in China, they don’t realize the scale of how fast and how developed China is becoming.  Most people still need to come here to really experience it by themselves and to see it with their own eyes how impressive it is what China is doing in the education sector, in industry, in everything.  I think a lot more people should be considering discovering China firsthand by themselves.

What kind of other businesses did your classmates start?

Anything else you’d like to say to foreign students who are considering studying abroad?

Just stop considering it and just do it!

I was very surprised and I was impressed, I did not expect the experience here to be as eye-opening as it is.  The first thing I’d tell them is just go for it and to come see for themselves.

How would you describe UNNC in one word?

My experience in Nottingham in one word?  I’d say eye opening about China.

Are you interested in studying at UNNC? Check out all the programs here

Book a time with an advisor here.