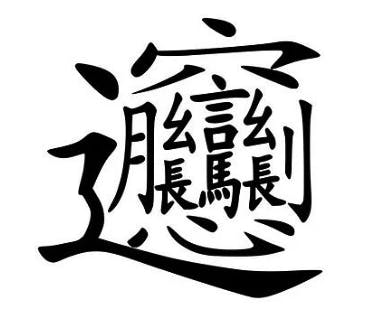 There are over 80,000 characters in Chinese, although this includes many traditional characters that are no longer in use. There are no more than 3,000 commonly used characters and with the knowledge of those 3,000 characters you’ll have no trouble reading newspapers, magazines, and other commonly used written materials. Many of these characters share components (or radicals) and so once you begin learning you will see patterns and it becomes easier to learn more. Take a second look at the “ma” example: “妈”, “马”, “骂”, and “吗” are not only pronounced in very similar ways, they also share the same radical “马” (which is the symbol for horse).

In addition, the conception of “word” is different from that of “character”. One Chinese word could be composed of only one character or several characters. You cannot take for granted that two characters are two words; they could be one word as a whole. For example, individually speaking, the character 黄means yellow, and 瓜means melon; but the meaning of 黄瓜 is a hundred miles away from “a yellow melon”.  Actually, it means cucumber; the two characters make one word as a whole.

To learn a foreign language is a long process, you cannot expect instant success. Start with the easy, daily used words and phrases, and you’ll make progress gradually. The good news is that Chinese has very simple grammar and you don’t have to worry about tense, verb conjugation, plural forms, and gender in the same way as European languages.