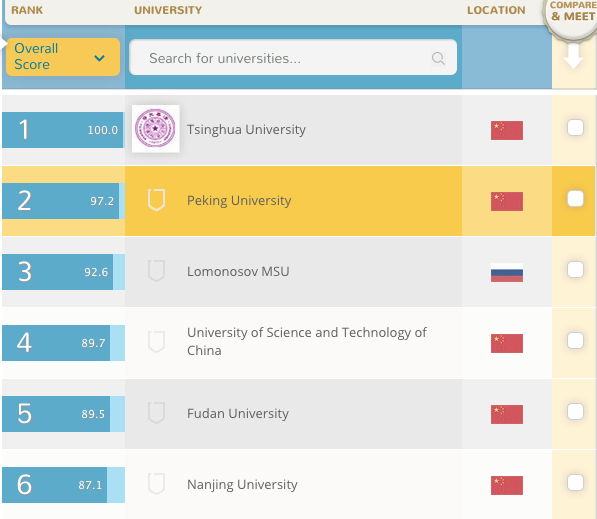 With around 2,000 Universities, over 20 million enrolled students, over 7 million fresh graduates each year, and overtaking USA as the world’s largest producer of PhD graduates, China is an education superpower. Increasingly, international students are attracted to study in China, with the huge opportunities of a rapidly, developing economy, investment in education system, and capacity. There are over 5,000 programs available in English, and many more available in Chinese. But how should you choose which University to study at?

Ranking Universities is normally done through an algorithm that takes into account a number of factors such as: academic reputation, citations in journals, employment prospects,  and international outlook, among others. A leading ranking of this is QS University rankings, which ranks Chinese Universities as part of BRIC Universities, with Chinese Universities doing particularly well.

There are other rankings out there, some of similar method. One should be aware that some rankings such as Wu Shulian may not be reliable with the reported fees for ranking scandal, where Universities paid to rank higher.

Many of these are not measured in the rankings of Universities, and while they do often correlate with the ranking of the University as a whole, this is not necessarily so.

As a result of this there are some Universities that do not appear as they should on many of the league tables if it was written the perspective of international students.

For further information on Chinese Universities, go to our site or contact us.