Founded in 1895 as Peiyang University, Tianjin University (TJU) is the first university in China. As the pioneer of modern higher education in China, TJU has been committed to the mission of revitalizing this country through education ever since its foundation.

In 1959, it became one of the first National Key Universities and in later years was among the first group of universities to be included in the “211” and “985” projects which aim at developing world-class universities. TJU is equipped with experienced faculty and has distinctive disciplinary features. It is committed to constantly improving its education quality and level of scientific research in an effort to maintain its position as a world-class institution.

About the School of International Education (SIE)

At present, Tianjin University has formed various types and levels in international student education including short-term and long-term Chinese language courses, undergraduate, master degree to Ph. D students. There are 42 countries students are studying at this university now, compared with that of 20 years ago, only 10 countries students studied here. Along with increases of international students and their countries, there has formed a multi-culture and internationalization atmosphere on campus. 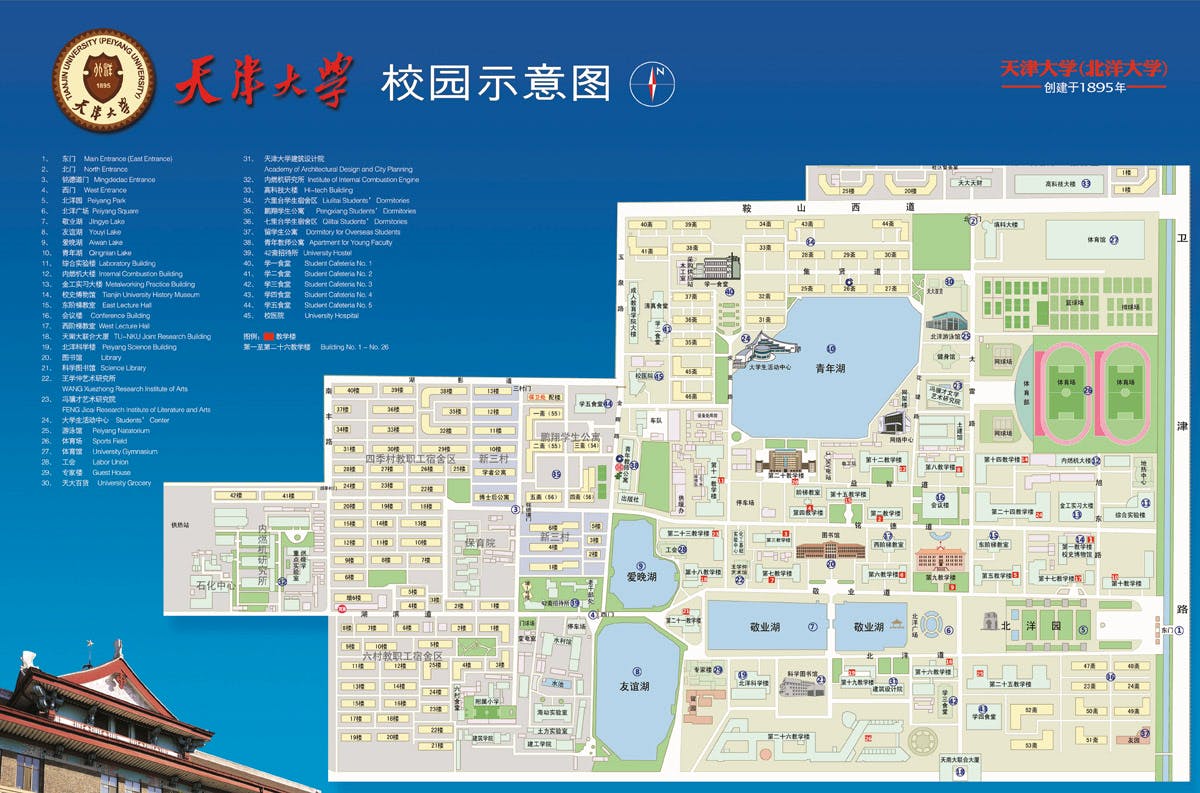 Situated in the heart of Tianjin City, one of the four municipalities directly under the Central Government of China, the University offers an unrivalled student experience in a thriving, cosmopolitan community which will set the scene for the rest of your life. Known as a microcosm of modern China, Tianjin has been selected as the best commercial city and the most creative city in mainland China, also one of top ten Charming Tourist City in the nation.

About 120 kilometers away or 30 minutes by inter-city express train from Beijing, Capital of China, Tianjin enjoys the convenience as Beijing’s neighbor, and much lower cost of living compared with other cities in its category, such as Shanghai and Beijing.

As the permanent host city of the Summer Davos Forum, Tianjin is now an economic center, the largest international port city and the eco city in Northern China. With the national strategies of Tianjin Binhai New Area, Beijing-Tianjin-Hebei integration and Tianjin Free Trade Zone, a number of leading companies have their branches, R&D centers or even headquarters in Tianjin, which bring plenty of job offers and internship opportunities.

TJU has one of the most active on-campus communities in China. A variety of extracurricular activities are offered through dozens of student groups and organizations such as Peiyang Arts Troupe, Youth Volunteer Association and many other clubs around campus. They offer social events such as the Weekend Concert, Robot Festival and so on. The campus provides a unique and supportive environment in which students can learn and grow while enjoying the campus life.

There are many sports fitness place in Tianjin University. For example, student activity center, stadium, gymnasium, swimming pool, tennis court, badminton court and table tennis hall etc. Students can access these places with their Student ID Card. And they have to pay the relevant expenses.

Bachelor’s in Business with Scholarship

Bachelor’s in Business with Scholarship

Bachelor’s in Computer Science / Internet of Things with Scholarship

Bachelor’s in Computer Science / Internet of Things with Scholarship