Shanghai Jiao Tong University (SJTU), as one of the higher education institutions which enjoy a long history and a world-renowned reputation in China, is a key university directly under the administration of the Ministry of Education (MOE) of the People’s Republic of China and co-constructed by MOE and Shanghai Municipal Government. Through 117 years’ unremitting efforts, SJTU has become a comprehensive, research-oriented, and internationalized top university in China.

With profound cultural background, an age-old tradition on education, strenuous development history, and great achievements made since the reform and opening up, SJTU has attracted wide attention both inside and outside China.

Carrying the mission of preserving cultural heritage, and seeking for the truth, bearing the responsibility of invigorating the Chinese nation and developing for the benefits of mankind, today this centennial university is sailing for the aim of becoming a comprehensive, research-oriented and internationalized world-class university.

The Shanghai Jiao Tong University (SJTU) Library, from its humble origin as a small reading room built in 1896 upon the establishment of the Nan Yang Public School, is now one of the most venerable university libraries in China today. The SJTU Library system has come a long way since the construction of the first university library building in 1919. Laters additions included the Pao Sui-Loong Library on the Xuhui campus (October 1985), the Pao Yue-Kong Library on the Minhang campus (October 1992), and the Main Library on the Minhang campus (September 2008). The School of Agriculture Library from the Qibao campus became a member of SJTU Library system in September 1999, as did the School of Medicine Library from the Luwan campus, in June 2005. 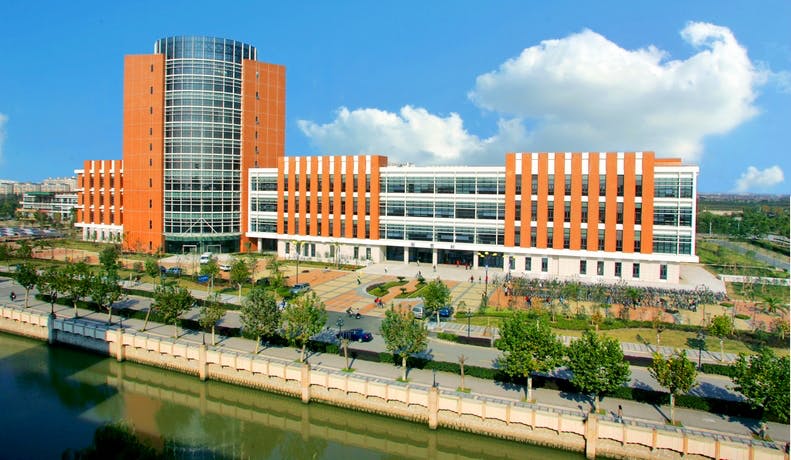 SJTU Library has been committed to fostering innovation, practice and academic excellence, since its founding over a century ago. Over the years, SJTU Library has made great progress and achievements. SJTU Library system, with a total area of 63,700m2, currently comprises a number of branches covering a wide range of fields on natural and social science and technology. Affiliated libraries and reading rooms are housed in different schools and departments. Equipped with rich resources and state of the art facilities, SJTU Library is now boasts an open and integrated service system that facilitates and promotes research initiatives in all areas.

The New Gymnasium is located at the north-western corner of Minhang Campus with first-class equipments and magnificent decoration. This comprehensive gymnasium has hosted many lectures, concerts and games, including the basketball games of Shanghai Special Olympic Games in 2007.

Located at the southwest corner on Minhang campus, this outdoor stadium has hosted many significant assemblies and ceremonies as well as the sports meetings. There is also a tennis court and a basketball court to the south and north of the stadium.

The stadium and gymnasium are seated in the center of the student activity zone. The stadium offers grounds for soccer, baseball and jogging, and the gymnasium houses table tennis courts and a basketball court on the first floor and badminton courts on the second.

Student associations of SJTU offer a wide variety of unique and popular activities, and play an important role in the students’ extracurricular life as a supplement for curricular programs and an important part of SJTU’s campus culture. There are now 168 student associations which can be classified into five main categories: politics and economics, volunteer and charity, academics and science, culture and art, and sports and fitness. The total number of the students in these associations has reached 17,000, of which 8,000 are active members.

Master’s in Information and Communication Engineering

Master’s in Information and Communication Engineering

I enjoyed the time at the JT university. In the campus you can find anything you need, there is a family market and a small shop where you can buy the necessary for the stay. I was in building n°9, and my room was quite good, there is anything you need, with the personal bathroom. In the campus there is a sports field where you can run, dance, play soccer and get Taiichi lessons for free by Chinese people. The teachers were very kind and the quality of lessons was very good. I'm a Chinese student in Italy but I never find it so easy to learn as at the JT.