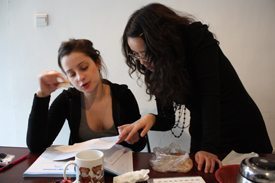 Hutong School in Beijing offers a wide range of Chinese language classes catered to your needs.

Whether you are looking to get by in Beijing and be able to easily talk to the taxi driver, buy groceries at your local market and have a chit-chat with your neighbor or your aim is to obtain full professional working proficiency or even pass the HSK 6 test, we got you covered!

Studying Chinese should not only cover the learning of vocabulary and grammar but also offer you cultural insight and a profound understanding of the people and customs of China. 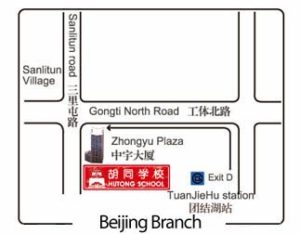 Our Beijing Branch is located in the heart of Sanlitun, close to the Central Business District. The school is conveniently located for the many expatriates who work and live in Beijing as well as for students learning Chinese or doing an internship.

Life in Beijing is pleasant, charming, cosmopolitan…all of that and much more! You can immerse yourself into the traditional Chinese lifestyle by simply taking a walk in the Hutongs  胡同 (hútòng); but, at the same time, will be surprised by the trendiest and modern Chinese atmosphere ​when simply going around the corner.

By far the most convenient means of getting around in Beijing is still by bicycle. Although the traffic conditions are less and less suitable for riding a bike, for distances up to around 10 km, it is still probably faster to ride the bike than to take a bus. We recommend that everyone staying for longer than a month should get a bike, as it will facilitate transportation invaluably.

The subway is the most reliable form of public transport. There are just no traffic jams under the ground (yet), crazy taxi and bus drivers just don’t seem to be an issue, and reasonable spacing between the trains means you never have to wait on the platform for more than five minutes during the daytime, but crowded wagons are not uncommon during the rush hours.

Buses in Beijing are OK, but traffic jams make them ridiculously slow. They are also often crowded. Generally, try to avoid the rush hours of 7-9am and 5-7pm. Take the subway or ride your bike at these times, and preferably at other times too.

There are some 68,000 taxis in Beijing, so getting one within a couple of minutes should be no problem even in the middle of the night (you might have difficulties finding a free cab when it is raining, though). They are also quite cheap. Prices have been unified recently and all taxi’s now cost 10CNY for the first 3 km and 2 CNY for every additional km or for every 5 minutes you are stuck in traffic.

Sanlitun (三里屯; Sānlĭtún) is the most popular drinking and dancing area for foreigners in Beijing, and offers some bars on the North Street (the South Street was a much better and cheaper option, but has lately been demolished due to constructions). The eastern side of the street leading from Gōngtĭ bĕilù to Dōngzhíménwài dàjiē is lined up with more fancy bars, while the narrow hutongs on the west of the bar street offer a different style. The “Poachers Inn” is probably one of the most popular bars among foreigners in this area.

The Wŭdàokŏu (五道口) area is the paradise of university students. Most universities are located there; hence most overseas students are too. “Propaganda” is a popular underground disco almost right next to the Wŭdàokŏu (五道口) light rail station (line 13). Walk south on the road that goes along the rail line, and you’ll see it on the right side. “Lush” is on the same road even closer to the station, right on the corner and often has live music and is a more suitable option for those who feel too old for discos. For cheap drinks and a friendly atmosphere, try the “Bla Bla Bar” (known as “Bra Bra Bar” among some funny BLCU students) on the campus of Beijing Language and Culture University, or BLCU (Bĕijīng Yŭyán Dàxué; 北京语言大学).

The variety of food available in Beijing is ab-so-lu-te-ly amazing. As far as Chinese food is concerned, you can find many different regional specialties from all over China. Many small restaurants are proliferating throughout the city, offering a great variety of tastes. Since Beijing has become a true metropolis in recent years, the number of restaurants offering Western and Asian food has boomed.

You will find that China is a great place for shopping. Prices are normally cheaper than in western countries, and the selection of all kinds of basic things is huge. Of course, to get the best price, you always need to go through a certain amount of bargaining, sometimes a lot, but that is also part of the fun!

"What separates Hutong School from all the other schools is the staff: everyone is nice, welcoming and engaged. The classes are very involved, and the group environment serves well for practicing speaking. After a few months, I was speaking Chinese well enough to be hired in a full time management position in Shanghai."
Max USA