Beijing Normal University, a key university under the administration of the Ministry of Education is a renowned institution of higher education known for teacher education, education science and basic learning in both the arts and the sciences.

Beijing Normal University is acknowledged as one of the nation’s first ten key universities. The school entered into the first “211 Project” Construction Program during the time of the Ninth Five-Year Plan.

The main campus (North Taipingzhuang Campus) of Beijing Normal University covers 1,048 acres that serve as an important place for the university to carry out educational activities. The school has 1,800 long-term international students. The comprehensive disciplinary strength of Beijing Normal University puts the school at the forefront of the nation’s advanced teaching institutions. In 2002, BNU was one of the top six universities with independent examination and approval authority for undergraduate majors.

Beijing Normal University promotes broad international cooperation and exchange, having signed cooperative agreements with nearly three hundred universities and research institutes from more than thirty nations and regions and exchanging students through cooperative programs with over fifty universities from places that include the United States, the UK, Japan, South Korea and Canada.

Adhering to a fine tradition of “Patriotism, Progress, Honesty, Sincerity, Truth-Seeking, Innovation and being a paragon of virtue and learning” while embodying the spirit of “Learn, so as to instruct others and Act, to serve as example to all,” for over a hundred years Beijing Normal University has lived by the philosophy of “Pursuing knowledge, Cultivating personality, and Helping the whole world.”

Lance Ubungu talks about about his story coming to China and experiences studying the PhD in Education at Beijing Normal University.

Beijing, the capital of China, is an ancient city with a long history. 3000 years ago during the Zhou dynasty, Beijing, which was called Ji at that time had been named capital of Yan. Thereafter, Liao, Jin, Yuan, Ming and Qing dynasty all made Beijing their capital.

Beijing’s long history makes it a precious cultural treasure. Winding for several kilometers, the Great Wall is the only historical man-made structure that could be seen in the Beijing area. The Summer Palace is a classic composition of ancient royal gardens, and the Forbidden City is one of the largest royal palaces in the world. Tiantan is where the emperor used to fete ancestors, and also the soul of Chinese ancient constructions.

These four sites are confirmed as world cultural heritage by UNESCO. However, the best representatives for Beijing are the vanishing Hutongs and square courtyards. Through hundreds of years, they have become symbol of Beijing’s life. Tian’anmen Square being still brilliant today with cloverleaf junctions and skyscrapers everywhere, the old-timey scene and modern culture are combined to present a brand new visage of Beijing.

At Beijing Normal University, different courses are taught in different teaching buildings. Teaching buildings of each faculty are all spread out across the entire campus. Independent learning is an important factor of university life.

As such, Beijing Normal University provides ample study facilities for its staff and students to do study and do research, such as the library, teaching buildings and etc.

Beijing Normal University Library developed out of the reading room of education department, Imperial University of Peking, which was established in 1902. After many times broaden scale and moving, the library services are mainly provided by the main library, which firstly opened in 2011, the educational branch library and many school or department reading rooms. 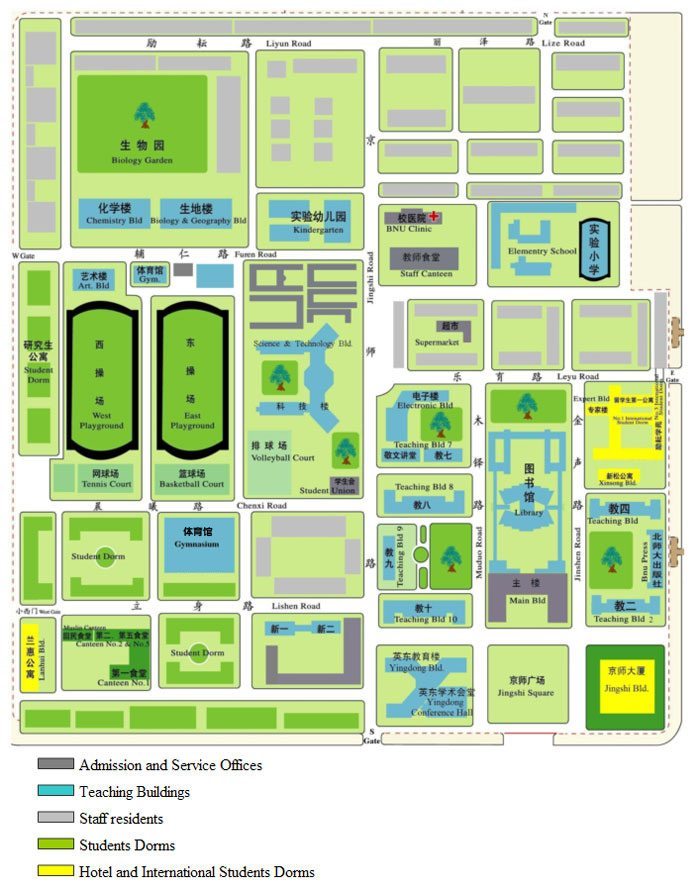 Since 2010, Beijing Normal University has been the organizer for Beijing International Students Night, a large scale theatrical performance. It is held annually in December. It showcases talents from diverse culture and encourages cross cultural exchange. Students from universities across the country are also invited to perform.

In order to provide a platform for students who have much enthusiasm with Chinese culture and Chinese, BNU holds the festival of Chinese culture and art communication with the theme of “World Looks at China”, aiming to broaden Chinese students’ international horizons and help foreign students to know more about Chinese culture by various types of activities.

BNU’s International Student’s Office (ISO) organizes cultural and sports activities once a month for students to visit the main attractions in Beijing and also learn more about Chinese traditional arts.

The BNU Debate team is a unique and dynamic form of debate. It format combining the concepts of “prepared” topics with “impromptu” topics, encouraging debaters to focus on specified issues rather than debate theory or procedural arguments. This highly interactive style of debate allows debaters to engage each other, even during speeches. This challenging format requires good teamwork and in-depth quality argumentation.

Master’s in Contemporary Development of China

Master’s in Contemporary Development of China

Master’s in World Economy and China

Master’s in World Economy and China

"Our classes in the English taught MA program are interesting and teachers seek to engage every student in class discussions and interpretation of the material. The multicultural atmosphere in the classroom and daily life allows you to continually learn about different people and places."